Secret Contents Of Ever Given – Evergreen Container Ship 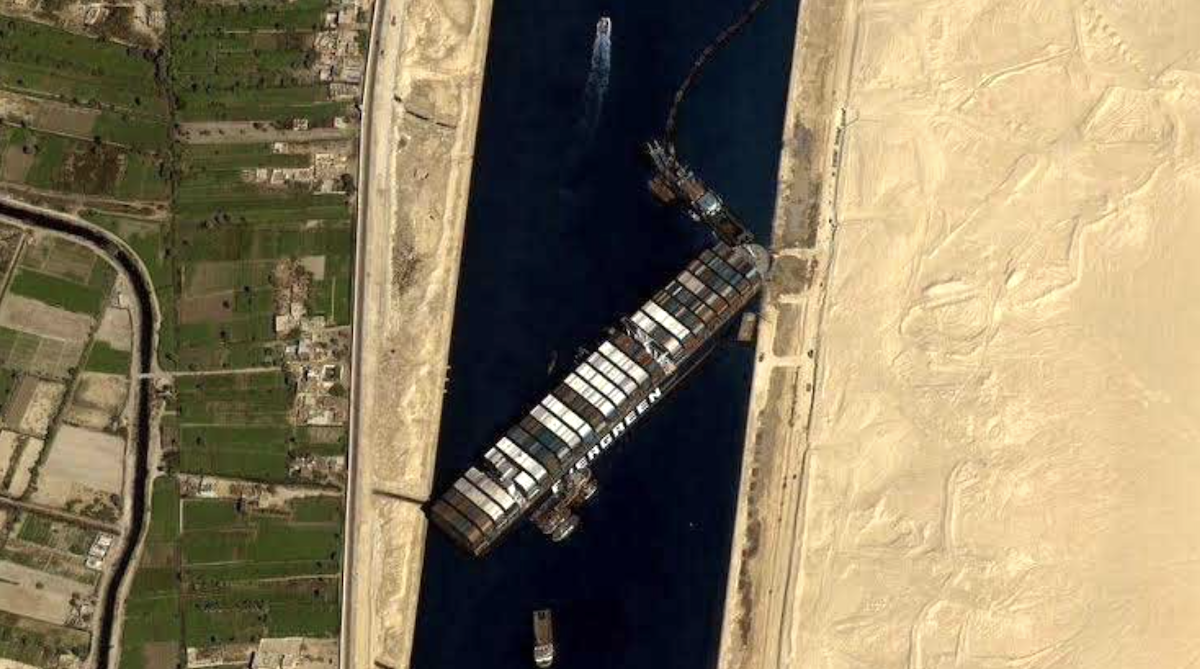 (Globalists ) 1st Card, what was it? The Techno Weapon Corona Covid-19!
They were planning to put an end to this March.

Do you know WHY the corona cases are going up?

Now, In order to understand what I mean, We have written an article about this on mavigazetem.com, and as we go along, we will expose this further.

There (in Suez). Nationalist Powers carried out an operation against Global Powers.

The Evergreen crisis is a (secret operation (against Globalists)

All events are interrelated. Let me explain this …

Lets analyze this Step By Step and show you the visuals on the big screen.

This is Why Covid-19 Cases are on the Rise!!!
(Globalist) were planning to end (the Corona) game…

Hang On!!! I didn’t get this right! So the Evergreen Containers,
the so-called Suez Canal event, the Ship that was stuck there for days.

Why that Ship was stuck there? In that particular way? Is there a secret behind this? What should our interpretation of the Event be?

Of course, of course (there is a plan behind this)

Now Firstly, this was a good Slap on Globalists face,
by the Nationalist Powers!

SECOND SLAP no one (no media) spoke about this
apart from us (mavigazetem.com)

We will expand in this story further, Today I will explain today
how all this happened (how it was planned and set up)

Yes, This was the Second Act of Theatre!
(First Being Covid-19)

The climate Change Weapon, Yes this containers carried the
substances (Weapons) that would accelerate the Climate Change!!!

Without going into (too much) detail,
let me tell you in a few words:

Mr. Bill Gates have got his fingers in this pie

Very Simple, actually! As we all know,
for years he has been working on vaccines.

Recently he has been crazy about buying land, he has just bought
56,000 decares, which is 56 million m2 land just in Turkey

1st one, Covid, was about to come to an end
and I have been telling this for a while.

This Climate Conference main theme, I am actually quite sad talking about this, is about Oxs Gas. Even our Deputy Minister of Agriculture made a speech about how we should move to away from Beef Farming to sheep farming that this will reduce Greenhouses gases

These individuals must have felt very sad about what happened
(to the Evergreen containers). There is a Divine Power and
Allah (God) has also got a plan.

It doesn’t always happen as you (Globalists) have planned!

The contents of those containers had the Chemicals that would activate
the Second Techno Weapon, which works with 5G Radiation Beams
and transform earth’s soil using Special Information Technologies.

-Wow, you are saying all this Gear and Technologies were loaded on this Ship?
-Yes, Yes, all those contents were seized,
destroyed, and this (catastrophe) was prevented.

This was planned and produced over the last 30 years.

I would like to make a point here! People are talking, aren’t they?

“Nothing is happening, you said that after March
these things will happen…”

But you have to know where to look
and How to Interpret the Events!

You CAN’T see these events in the main media!

All these events are Real, True

Nationalist Powers Secret Services worked
on this together and unravelled what was set up.

Why do you think that Ship was parked there for so long?

Do you really think this was a coincidence
(What happened in China and Suez Canal)?

Immediately following these events Chinese Foreign Minister
Turned up in Turkey, Dollar (and FIAT Currencies) were on the rise

Yes some of our (governements) decisions had a reflection on this,
but the main drivers were them (Globalists) from all over the place.

China visited us on between 24-26 March,
Chinese Foreign Minister was in Turkey

and on the 27th of March The Evergreen container blocks
the Road in China, Simultaneously (How Bizarre)

Those are Messages, Strong Messages (to Global Capital)

Meetings in Turkey finalizes and the next day this happens.
These are Messages, Messages communicated in Inter Nations Language.

Now (I ask You All) Try to Interpret (Understand) this?
People should regularly try to avoid Conspiracy Theories and focus
on figuring out the Real Events Happening

Here what we saw was How the Global Capitals 2nd Card Project,
the Climate CHange Projects That has been Propagated for Years (was badly upset)…

Looking at this. What we see The World, Humanity is fighting with the Covid-19 in the Preliminary Round; however just behind the can see the Huge Climate Change Opponent Impatiently waiting (to get in the fight for the next round)

In other words we have been told:
What you are dealing with here is Tiny compared to what is awaiting
this is the meaning we should understand from this!

Of Course, they loudly announced this (2nd Stage would be CLimate Change).
Upon Covid 19s arrival these drawings were presented.

Already this Project has been in the making (for years).

After this, accompanied with the Classic Vegan “Project”,
Faux (Fake) Meat Project, This is very dangerous thing because

If you consume just 1 Type of Protein (in your food) the profiles of your
Amino Acids become inssufficient. No one (No Media)
is talking (explaining) about this!

(Fake Meat Project) Terrible things could be caused here,
specialist have spoken about this.

(Specialist) have actually explained this in very good way.
People should research and listen carefully. This was The Project!
In Mr Bill Gates style, he was planning to own: Food and Agriculture!

Because, Those Who Own the Food sources own the World, Ok?

-Can I Rear this Part from your article in mavigazetem.com.tr
about this Evergreen matter?
-Of course you can

Really Disturbing Facts are mentioned in the article.
I quickly would like to read through.

Containers in this Ship carried special chemicals which use 5G Transmitters radiation Beams that mix in with oxygen and in the process accelerate Climate Change.
This situation was completely prevented; the material was seized and was destroyed!

Following the Covid 19 scam, the global capitalist powers plan was to put in motion
the second scene of the movie and play the climate card.
Unfortunately, the process was interrupted by the Evergreen operation.

Upon hearing the bad news, all of a sudden European countries started
reporting higher Covid 19 cases and imposed new lockdowns.

Furthermore a country that was not invited to the climate conference was personally invited by Mr. Biden himself! Whatever happened unfortunately brought an end to Bill Gates
on gas and artificial meat project! How sad, billions are gone!

EXACTLY That (whats happened). Yes this is Real Matter!

Do you know what happened? Following this incident they invited us (Turkey)
to the Climate Conference; The (Global Capitalists) got the Message!

People must Finally Understand this

Following on from the First Part of our Program I had a chance to look at
what happened on social media, our directors team has also got some questions.

Let me start with a Tweet: You told us the insider story
of the Evergreen incident and why it was stuck there

Everyone (Every Media) was telling a different story here,
but we only just heard the Most Distinct explanation
of the events from yourselves.

One of our Listeners posted the following Tweet: No one knew or said what the Ship was carrying, now we just found out (why all media was hiding the truth)

-You are revealing what’s in the containers
-YES

You are unveiling the reason why this operation was carried out

You also are also claiming that Turkey also
took part and had a hand in this operation.

What you are saying here is that Turkey had a part in this operation that landed a (big) slap on Global Capitals Face, can you shortly again enlighten us on this matter?

This operation was carried out in cooperation with Few Nations:
Egypt, Qatar, Isreal and Turkey all working together

These Goods have been monitored constantly.

These (chemical) goods took 30 Years worth of investment and development;
(They were not something that you can produce easily or in short time);
Highly Technological Matter.

-There products were to serve the Climate Card,
-Yes

Yes Those materials, that Ship was to transport them to the relevant 5G Transmitters.
When used with those transmitters, this would cause huge infestations.

Do you know why Mr.Bill Gates needed this
and what he needed to use it for?

Why do you think (this happened)? Now, these are national secrets and cant be openly discussed,
but all of a sudden, Biden Invited Turkey to the Climate Conference!

Now They (Servants of Global Capital)
have started to paint a completely different picture.

Reason being, In EUs last conference Biden also took part,
as you know due to the Plandemy, they are doing teleconferences,
as you know, all EU countries take part

All those (EU country leaders) paid allegiance to Biden,
In other words, they paid their allegiances to the Global Capitalist System.

Why I am telling you this so you can
understand who is war with whom.

Yes, here on this Photo you can see all these countries
taking part and paying allegiance to Biden (i.e., Global Capitalists)